Do they not contemplate within themselves? Allah has not created the heavens and the earth and what is between them except in truth and for a specified term. And indeed, many of the people, in [the matter of] the meeting with their Lord, are disbelievers.   – Ar-Rum, verse 8

Reflection is one of the higher forms of ‘ibadah as it is said that an hour of reflection outweighs years upon years of ‘ibadah. Through reflection of the Signs of Allah, the heart expands with lights of certainty and faith. It is unfortunate that mankind are usually to engrossed in their daily activities to have time for reflection. Furthermore, the prescence of ‘tools of distractions’ such as the TV, Internet, Games, not to mention the various gadgets available these days,  keeps the mind busy from being able to slow down, stop and reflect.

The mind of man can be likened to a ‘monkey’ that jumps from one thought to another, one desire to another. Thus, out of His Mercy Allah ta’ala, commanded ‘ibadah like dhikr, prayer and fasting to help silence and subdue the monkey mind and concentrate upon Allah. Praise be to Him for apportioning times in our daily routine for remembrance of Him wherewith our hearts find rest and peace!

May the following wonders of creations within ourselves(that we are often heedless of) which the verse earlier stated, increase our awe and certainty. Amin!

We will show them Our signs in the horizons and within themselves until it becomes clear to them that it is the truth. But is it not sufficient concerning your Lord that He is, over all things, a Witness?   -Fussilat, verse 53.

Of course, besides our own created form, we are urged to reflect upon the verses of the Qur’an, the briefness of our life in this world, the Ressurection Day, the Hereafter, other creations of Allah. The best method to do reflection as told by our Shaykh is to be in wudhu’ (pure mental and physical state) and while doing dhikrullah.

The Difficulty to understand the Hereafter

If there was method by which a baby in the mother’s womb could be told that he has to leave the world in which he was, to go forth into another world which is much more spacious and where there are waterfalls, trees, the ‘pillarless’ sky, animals, peoples, sun, moon, different hues of colours, smells and sounds, the baby will not believe such a description.

And if whatever trees upon the earth were pens and the sea [was ink], replenished thereafter by seven [more] seas, the words of Allah would not be exhausted. Indeed, Allah is Exalted in Might and Wise. – Luqman, verse 27

On emerging from the womb, after several years, he comes to realise the intricacies of this world. However, there are still some aspects of a human life which he does not become aware of till he attains maturity. The next world stands in the same relationship with this material world as does the latter with the mother’s womb. Matters of the world to come is incomprehensible to us in this world. That is so even soon after death. The soul is therefore retained in barzakh where the soul achieves understanding of some things of the other world. The other world holds such pleasures before which pleasures of even the worldly days of adulthood or maturity are nothing. The short duration of the pleasures of adulthood is itself an argument of its lowliness!

1. for further facts of the human body to marvel at :- www.evidencesofcreation.com

2. an Excerpt from Tarbiatul ‘Ushaq – The Training of Divine Lovers with minor modifications

The Common man strives against his lower self to purify himself (with wudhu’) and perform the obligatory prayer on time, the act of which promises a huge reward and much benefits (e.g. subduing the nafs). While the elite of the muslims strive to carry out the sunnahs of the prayer. They strive to maintain khusyu’  in prayer.

O Friends, may Allah’s blessings be upon thee! Strive to pray with congregation in the mosques. Ibn Mas’ud said, “…In the time of the Prophet s.a.w, none left the congregational prayer except the hypocrites, al-munafiqun who are known for their hypocrisy. At times, a man will come to the mosque with two men supporting him (being too weak to walk) till they helped him to stand in the rows.”

When Ibnu ‘Abbas, the Prophet’s cousin rodhiyalllahu ‘anhu was asked regarding a man who fasts by day and prays by night but never prays in jama’ah nor the Friday prayers, he answered, “If he dies, he enters hell”

Rasulullah s.a.w. said, “Congregational Prayer is 27 times better than praying by oneself.” (Bukhari & Muslim) “Whoever prays in congregation for 40 days without missing the beginning takbiratol ihram, Allah shall write for him two freedoms, freedom from hypocrisy and HellFire.” (Ibnul Mubarak from Dhamrah bin Habib) 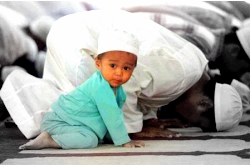 It is also related that on the Day of Ressurection, a group of people will have faces shining like stars. They will be asked by the Angels, “What did you do(to achieve such an honour)?”. They will reply, “We are the ones whom when the Adhan (Call to Prayer) was heard we would hurry to do our wudhu'”.  They will then be told to enter Paradise.

Another group will come and their faces will be shining beautifully like the moon. And these are the ones who had done their  wudhu’  before the Adhan even sounded. They will also be ushered to Paradise. Finally, a group will come whose faces shine like the Sun, gloriously and magnificently. And verily, they are the ones who were already prepared for prayer in the mosques even before the Adhan. They will have the highest positions and most perfect constituitions in Paradise.

Let us then make it a habit to pray in jama’ah as it is the profit of the trader, fruit of the pious, the sweet past-time of the ascetics and men of piety, a sweetness for Divine Lovers, the way of the Knowers of Allah and the scholars who practice their knowledge. Their hearts long for it and they are full of regrets if they were unable to perform it. They are sent condolences for missing the jama’ah as it is as if being separated from their Beloved. However, sadly this issue of jama’ah prayer is something unheard and practiced only by few in this age. The signs/symbols of the religion have disappeared and heedlesness have prevailed.

Habib Umar bin ‘Abd Rahman Al-Attas, when his son passed away, he was visited by relatives who came to give their condolences & grievances. However, Habib Umar with a puzzled expression said, “How petty indeed is calamity/trial to all you people! By Allah if I were to be late for Congregational prayer, none of you would come to send their condolences!” Masha’Allah the death of his son is minor compared to being late for solat jama’ah. And why is that not when Allah can easily grant him another son who might be more pious and filial!

Indeed congregational prayer is heavy for nafs. In a narration , it is said  that walking to the mosque for the Fajr Prayer is as if going  to jihad in the time of Rasulullah صلى الله عليه وسلم . Not only that, the lower self does not like to pray on time.

Imam al-Haddad was asked about the cure for those who feel lazy to perform their religious duties (i.e. divine worship etc.) and are easily swayed by their lusts. He replied: —
Know that laziness and giving in to one’s lusts are caused by 4 things. (1) ignorance, this can be overcome by seeking beneficial knowledge; (2) weak faith, this can be overcome by reflecting about the Allah’s Power and Signs manifested in the heavens and the earth and diligently performing good acts (optional prayers, fasts, charity etc.); (3) long hopes, overcome it by reflecting upon death and realize that death can come at any time, and (4) consumption of syubhah food (i.e. food which is not clearly halal or haram/forbidden), this can be overcome by being cautious and taking less food.

END_OF_DOCUMENT_TOKEN_TO_BE_REPLACED

Assalamu’alaikum (Peace Be Upon You)

"I do not claim innocence for myself;the ego is indeed an inciter to evil, save when my Lord shows Mercy; my Lord is indeed Forgiving, Merciful." Qur'an (12:53) I seek Allah's Forgiveness and do not claim that my intention in writing is confined to good religious purposes; how may I do so when I am aware of the hidden desires, egotistic passions, and worldly wishes that I harbour

I obtained the images from several sites. To their owners, I seek your permission to feature them in this blog. For any requests to remove them please e-mail me, Thank you // mhamdanbr@hotmail.com